The Uptown area as we know it has existed for less than 20 years, incorporating new high rises with elegant Victorian homes, like those on State and Thomas streets…

The State-Thomas area was revived by architects, interior designers and antique dealers in the 1970s. Uptown is one of the most pedestrian-friendly areas in Dallas. It is largely “new urbanist” in scope; the majority of facilities considered “Uptown institutions” are relatively new and were created in line with the more recent urbanist urban planning movement. The district is one of the most dense in the city and features a wide variety of establishments, including office buildings, residential towers, apartment complexes, retail centers, nightlife strips and hotels.

This mixed-use development practice lends itself to a very urban lifestyle, which makes Uptown very popular with younger professionals. Along with the historic State-Thomas neighborhood, Uptown is also home to winding, yet very walkable McKinney Avenue. The McKinney Avenue Transit Authority’s historic streetcars travel along the street in line with traffic. You’ll find West Village along McKinney as you’re traveling north toward the Knox/Henderson area. A walkable shopping and design district, it opened in 2001 and is now an established pet and pedestrian-friendly neighborhood. The Knox/Henderson area, which straddles Central Expressway, is famous for its long list of restaurants, bars and shops, some of which remain in their original structures. On the west side (Knox), which borders Highland Park, bigger names such as Crate & Barrel, Apple and Weir’s are mixed in with smaller, upscale boutique stores. The always-popular Katy Trail crosses directly across Knox street. Running east, Henderson features a more eclectic mix of attractions, from antique and resale shops to smaller, obscure eateries.

The area as a whole is very popular with young professionals and families. With construction of the AT&T Performing Arts Center in the 68-acre Arts District of Downtown, Dallas became the only city in the world that has four buildings within one contiguous block designed by four separate and distinguished Pritzker Architecture Prize winners. Also known as the Dallas Center for the Performing Arts, it includes four venues (Margot and Bill Winspear Opera House,Dee and Charles Wyly Theatre, City Performance Hall, Annette Strauss Square) and an urban park (Elaine D. and Charles A. Sammons Park) that unifies each facility. Other notable and popular facilities nearby include the Dallas Museum of Art, Morton H. Meyerson Symphony Center, Nasher Sculpture Center, One Arts Plaza and the Trammell and Margaret Crow Collection of Art. Recently, the city of Dallas invested $160 million of public funds in downtown Dallas for residential development, which attracted an additional $650 million of private investment. Redeveloped Main Street, with its influx of restaurants, hotels and converted residential space, has helped attract customers that Deep Ellum and the West End had since lost.

The newer Main Street Gardenoffers nice-sized green space residents have come to demand in recent years. Fall 2012 will also see the completion of a new $110 million urban deck park over Woodall Rodgers Freeway to create a physically seamless Uptown/Downtown district. The new 5.2 acre urban park, simply called “The Park”, will further strengthen the existing synergy between the Uptown real estate market and the booming development occurring in the Downtown Dallas Arts District which together help further the continuing growth and redevelopment of Downtown Dallas. Downtown is also home to the massive Dallas Convention Center and recently constructed Omni Dallas Convention Center hotel, which is a new, somewhat controversial member to the Dallas skyline. The nearby JFK memorial still attracts many visitors every year. Victory Park, considered the “Times Square” of Dallas, is a 75-acre master-planned development and is most notably home to theAmerican Airlines Center and the W Dallas Victory Hotel and Residences. This area also features some of the most luxurious and contemporary high-rise residences in Dallas.

The Perot Museum of Nature and Science is scheduled to open in early 2013. Other notable tenants include the House of Blues, as well as local television and radio stations. Victory Park also serves as corporate headquarters for several international firms. Nearby Areas: Oak Lawn/Turtle Creek essentially turn into Uptown. The Park Cities are directly north, and Lakewood is easily accessible from Downtown. 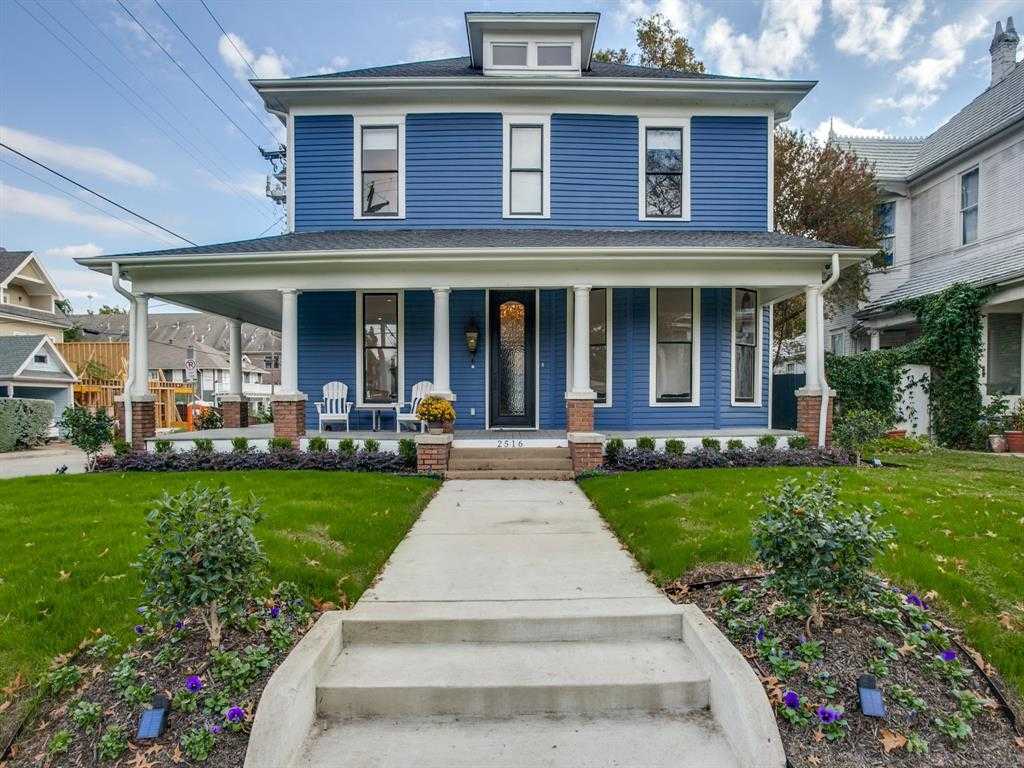 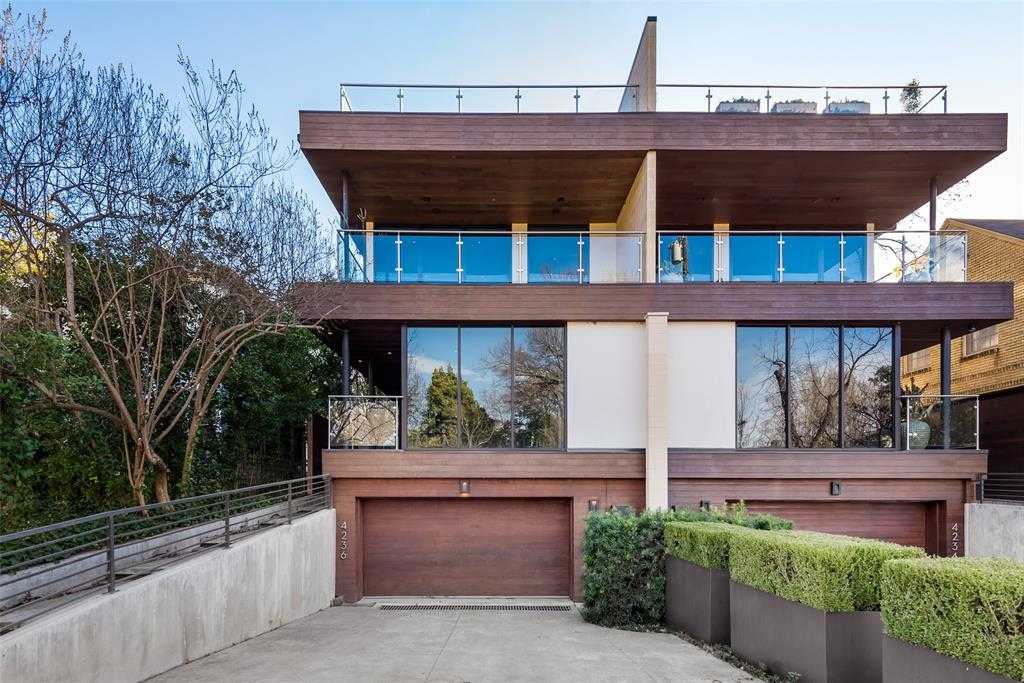 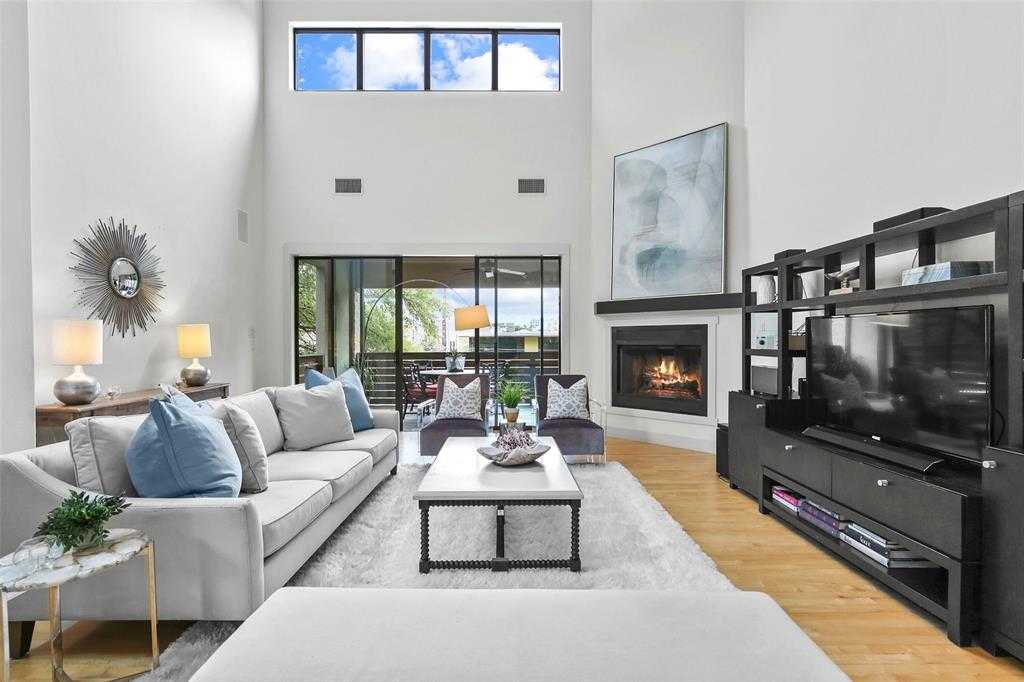 $1,195,000
3 Beds
2.5 Baths
3,359 SqFt
Status Active
MLS # 14432458
Property Type Single Family
Price Type --
Sought after Northern Heights Contemporary Stunner just steps from the Katy Trail! Built by J. Gregory Homes this SFA is the ideal setting for the urbanite with style and sophistication. This one checks all the boxes, with walks to dinner, an envy worthy party setting or a quiet retreat from hectic life. Soaring ceilings combined with wide open living spaces welcome you to a chef2019;s kitchen. Second floor features two balconies; the front off the lounge with fireplace and back overlooking pool. First and second floor have spacious living rooms with bars. Large Master suite with sitting area, his & hers closets and a study loft. Relax and escape by the pool and deck. Live in luxury in superb location with no HOA!
View Property 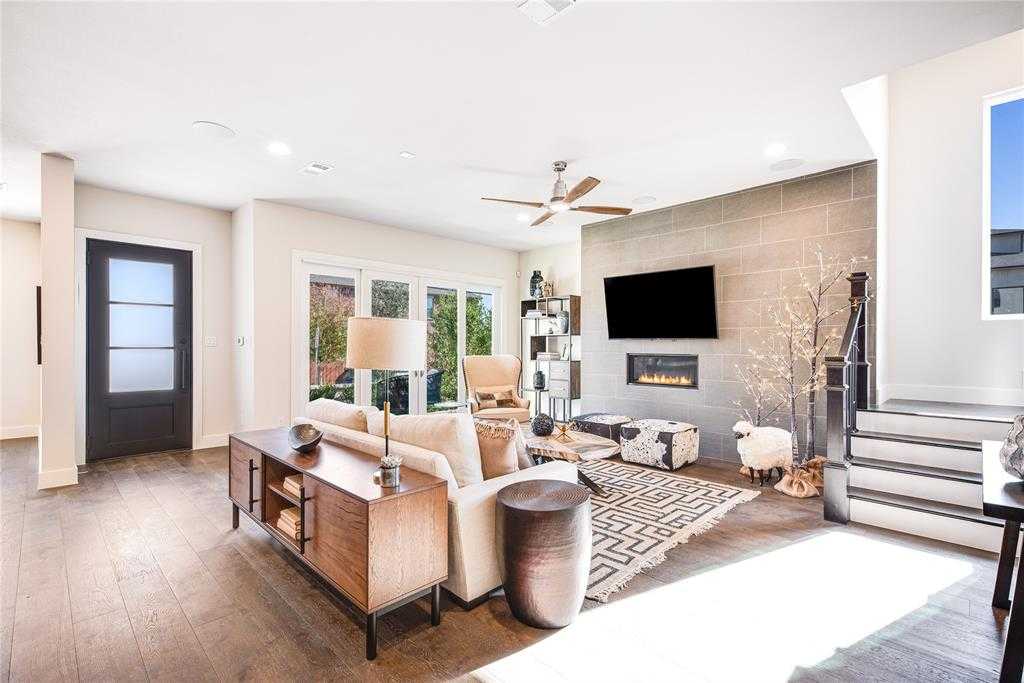 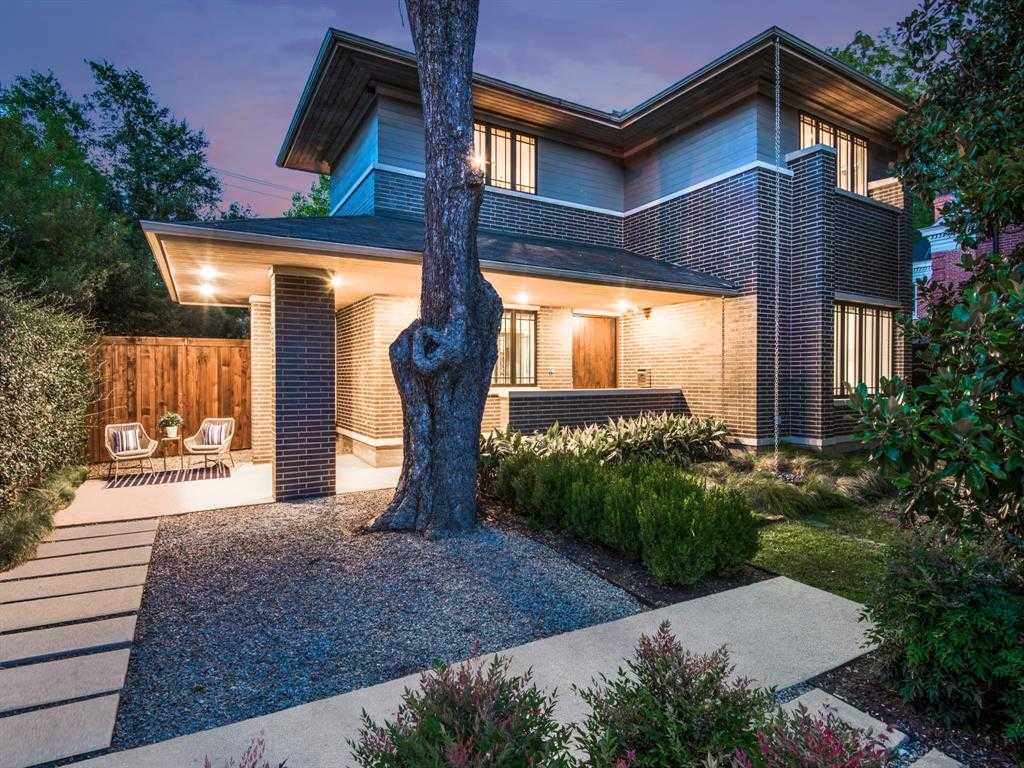 New
$999,000
3 Beds
2.5 Baths
2,914 SqFt
Status Active
MLS # 14503269
Property Type Single Family
Price Type --
Be content with what you have; rejoice in the way things are. When you realize there is nothing lacking, the whole world belongs to you. Lao Tzu. The world has come to realize that bigger is just that. It2019;s bigger. The joy of architecture is in creating something refined, something where each space is meaningful, usable. Where life happens. When that purpose merges with significant beauty and exceptional efficiency, the world sits well on its axis. In one of the most friendly, walkable neighborhoods in Dallas, a modern masterpiece sits sheltered behind a century old magnolia tree. Every finish elevated to tomorrow2019;s standards with the clean ease of today. Every detail smart. LEED Certified. And undeniably rare.
View Property 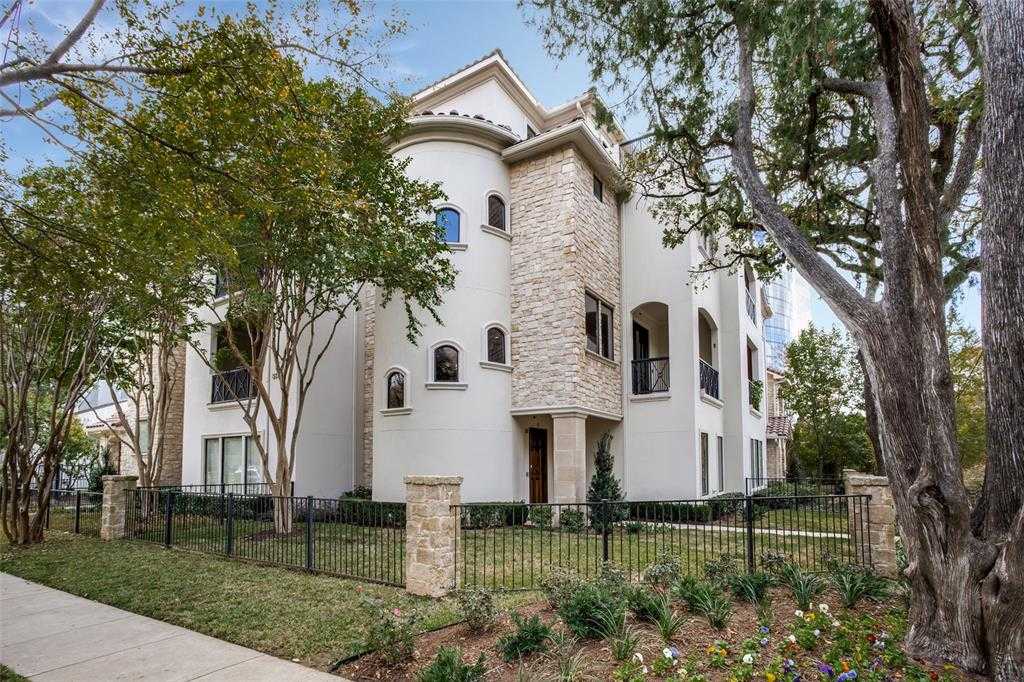 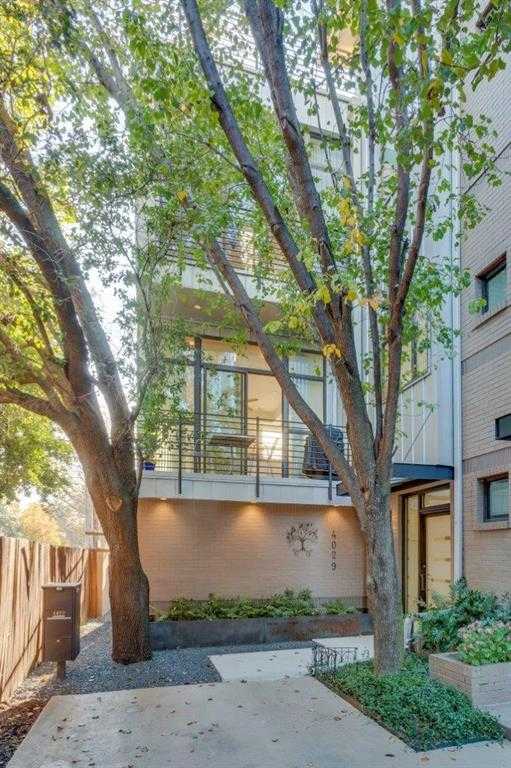 $995,000
3 Beds
3.5 Baths
2,975 SqFt
Status Active
MLS # 14489732
Property Type Townhouse
Price Type --
This is a true attention catcher. *Modern townhome immersed in a quiet and highly walkable neighborhood, close to restaurants, retail, and trails. There is an extra-wide floating staircase perfect for showcasing art. There is plenty of natural light and tree views from all four sides. The kitchen is chef inspired, providing a focal point for entertaining. The master suite features a window wall, custom closet, and attached space perfect for working out or relaxing. One of a kind high end structure. Enjoy four outdoor spaces, including a 2 rooftop areas with shower and jacuzzi. Surround downtown views. Alley entry to garages.
View Property 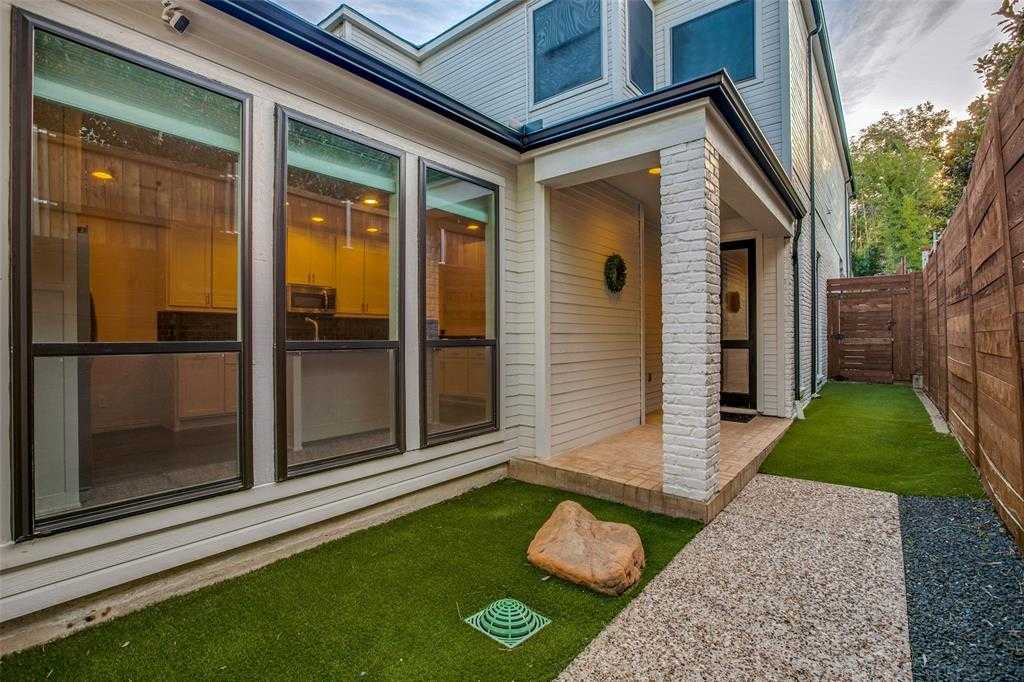 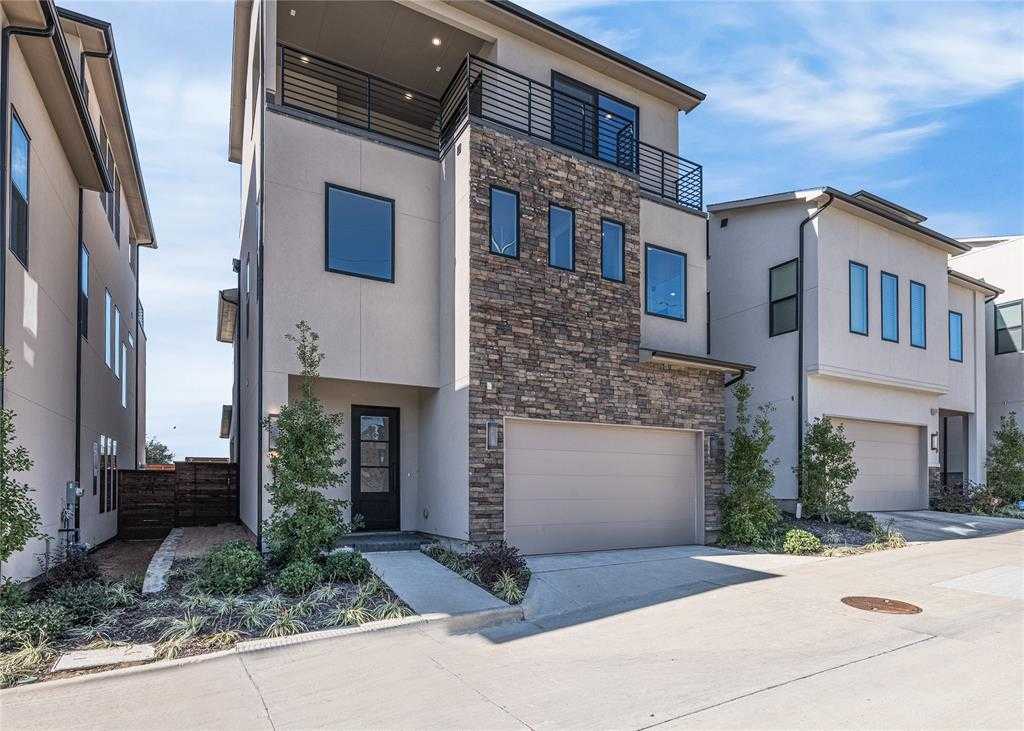 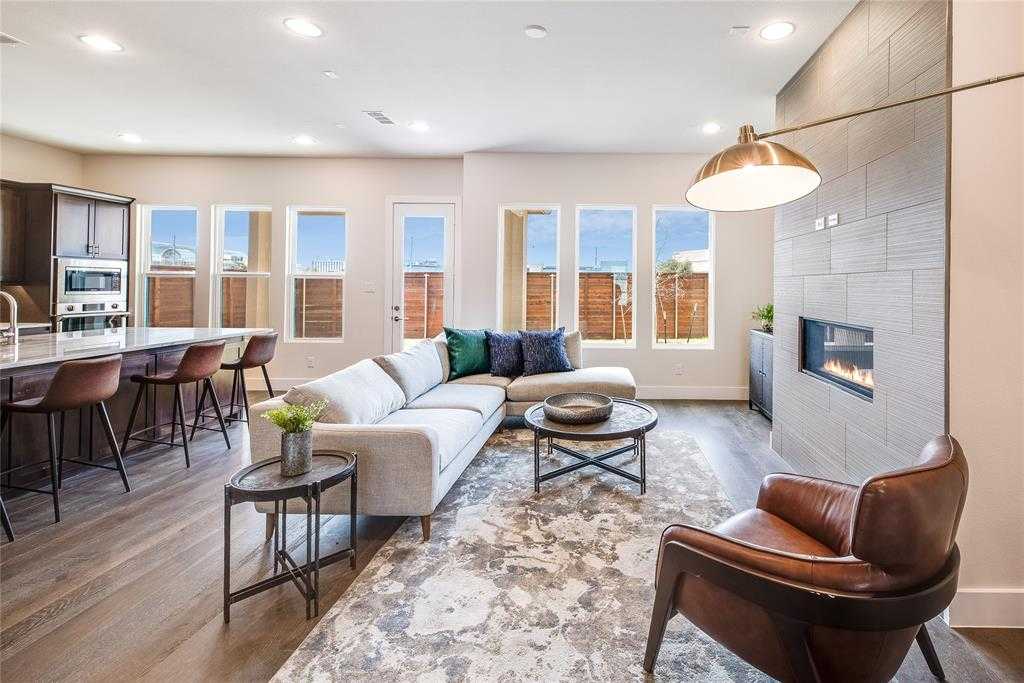 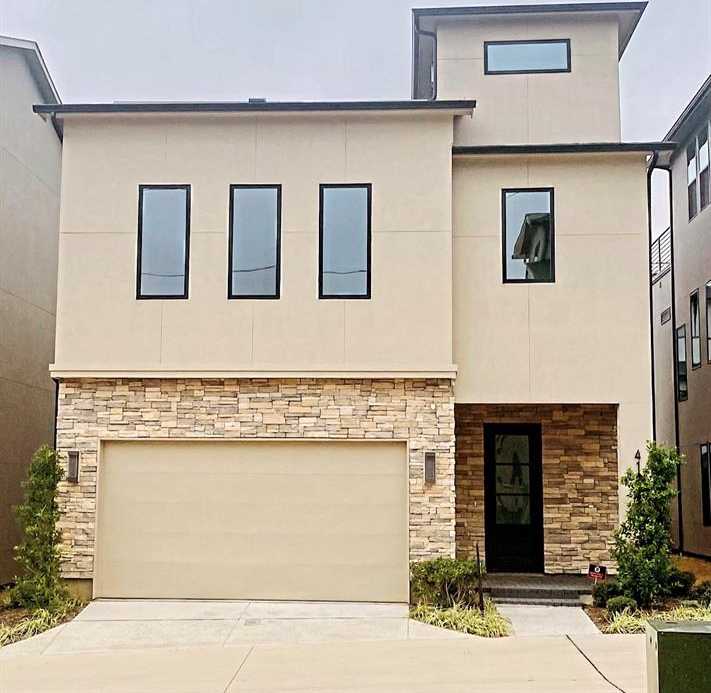 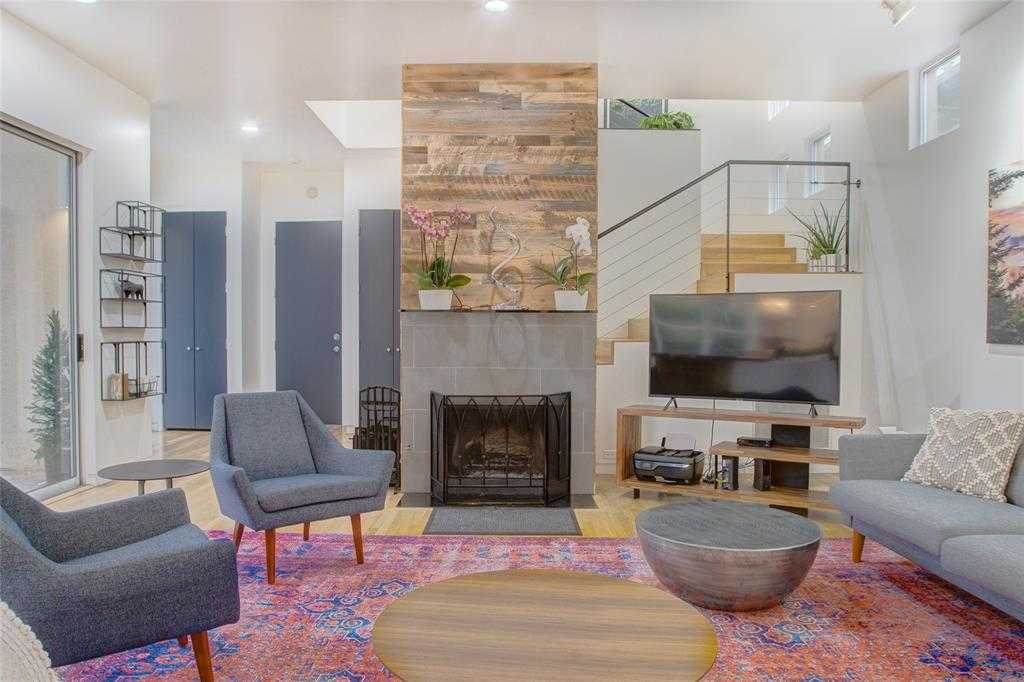 $699,000
2 Beds
2.5 Baths
2,580 SqFt
Status Active
MLS # 14481152
Property Type Half Duplex
Price Type --
Possibly the most unique property in Oak Lawn. Completely remodeled contemporary half duplex with two outdoor spaces. Originally designed by Diane Cheatham. Open floor plan full of light. Gorgeous oak slab bar. Wood burning fireplace with gas starter. Patio with built-in furniture and fire pit for entertaining. Back yard is bigger than most in the neighborhood. Two huge master bedrooms with vaulted ceilings. The primary master features a soaking tub, separate vanities, separate shower, and two walk-in closets. Cozy study on the landing with built-in bookcase. This is a once in a lifetime opportunity to own a contemporary masterpiece in the heart of Oak Lawn.
View Property
Map
Property listings 1 - 12 of 144
View As: Thumbnails List 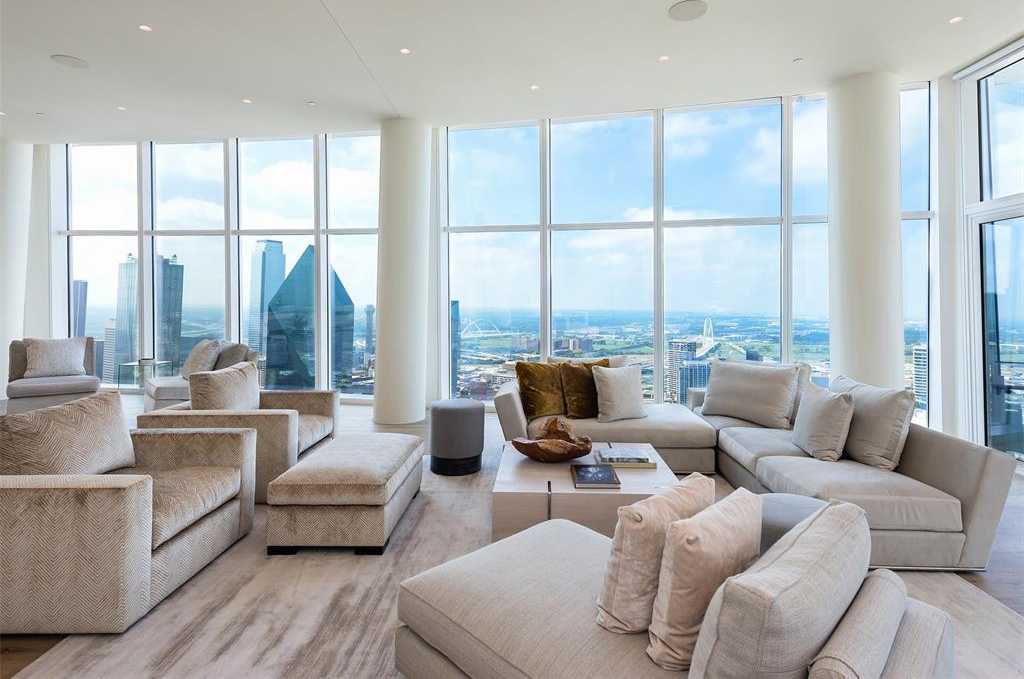 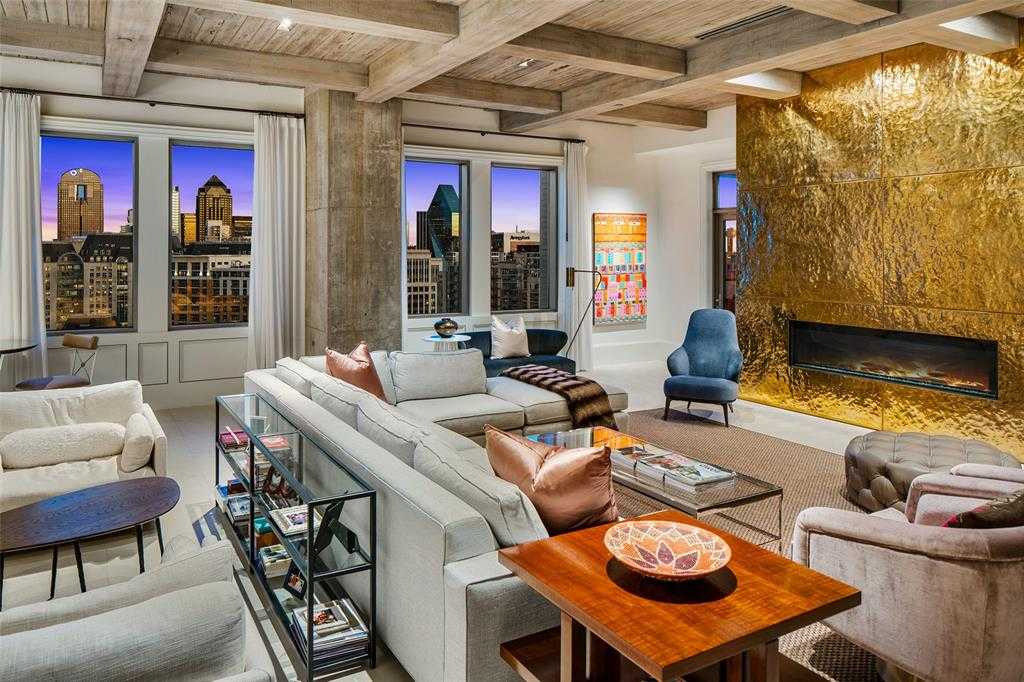 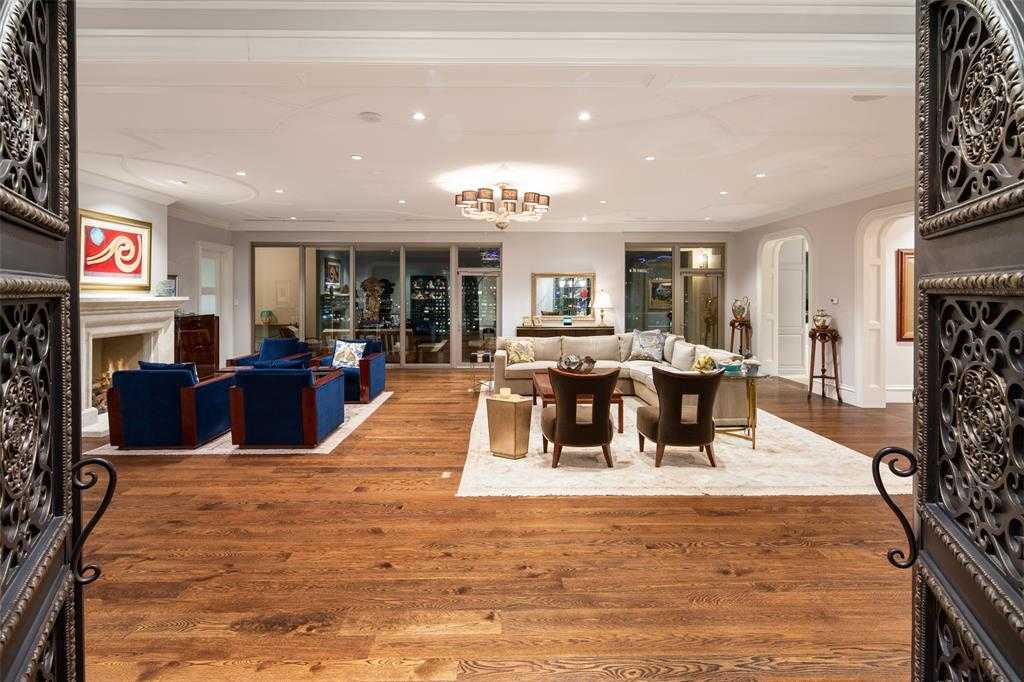 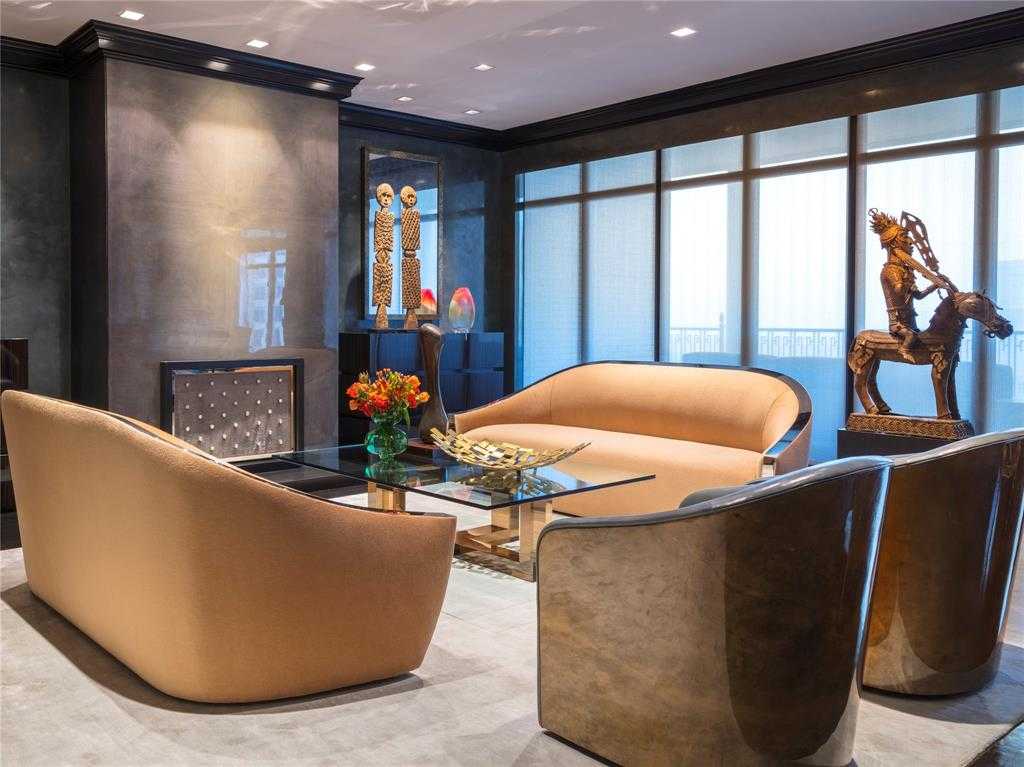 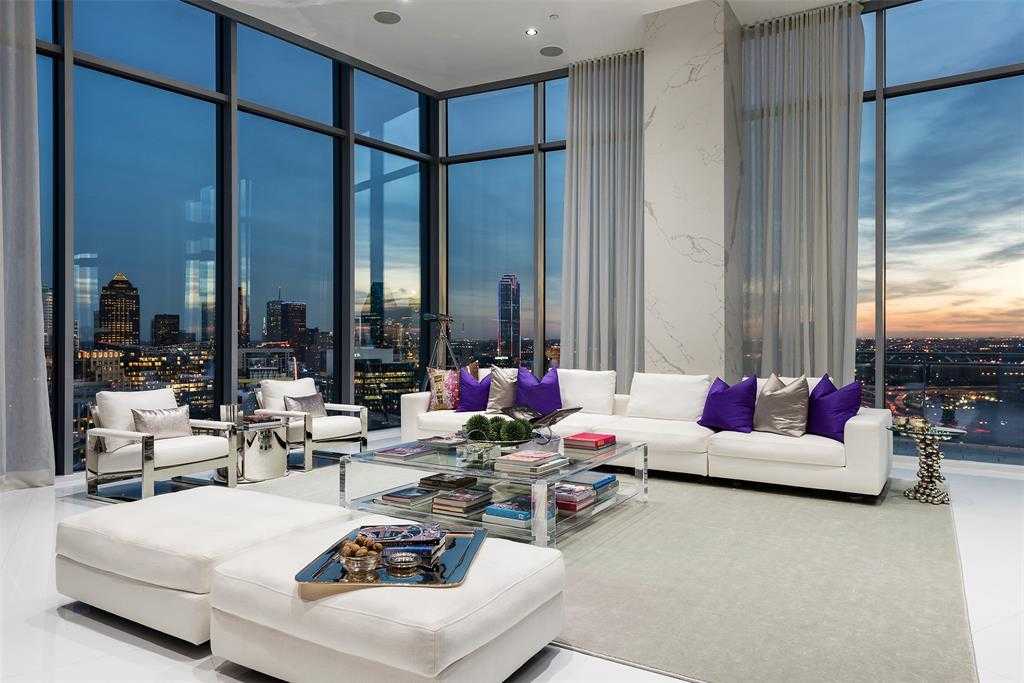 $5,995,000
3 Beds
4.5 Baths
5,025 SqFt
Status Active
MLS # 14501824
Property Type Condo
Price Type --
This beautiful two story Azure penthouse offers a bright and chic place to live and entertain both indoors and outdoors. Enjoy time inside taking in the Dallas views from the 14 foot floor to ceiling windows, or outside on the rooftop in the pool or watching a movie on the outdoor projector. A true one of a kind high rise condo.
View Property 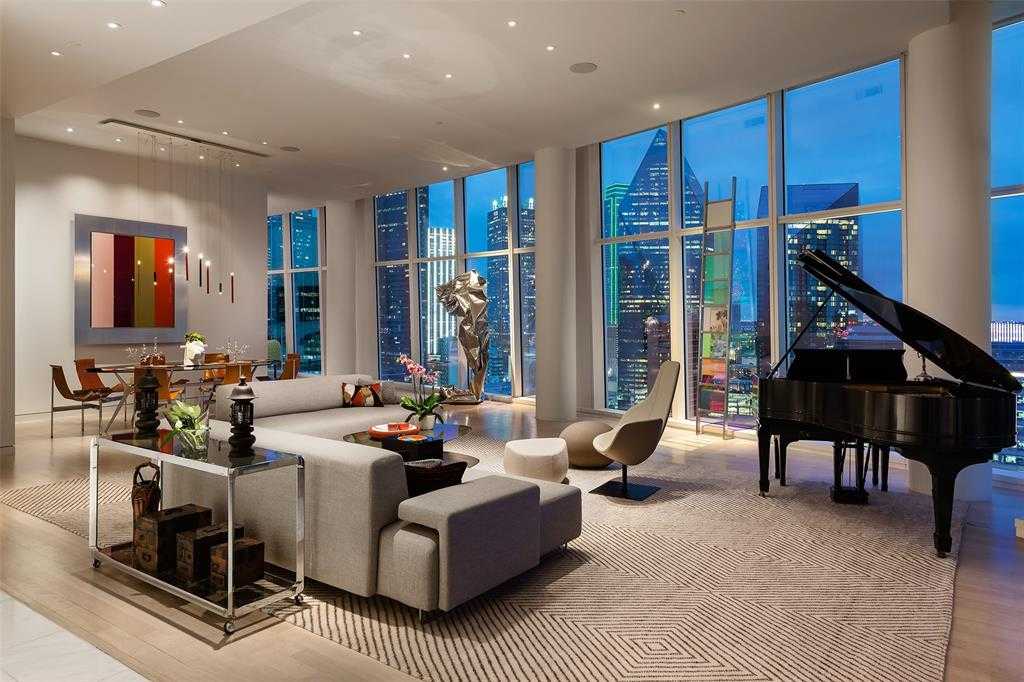 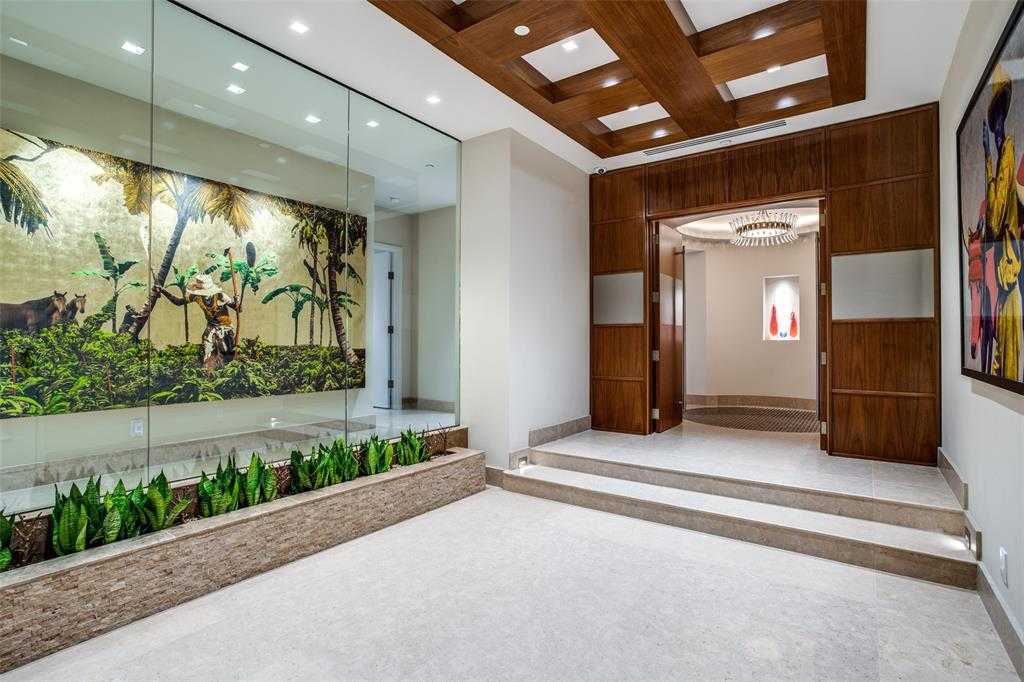 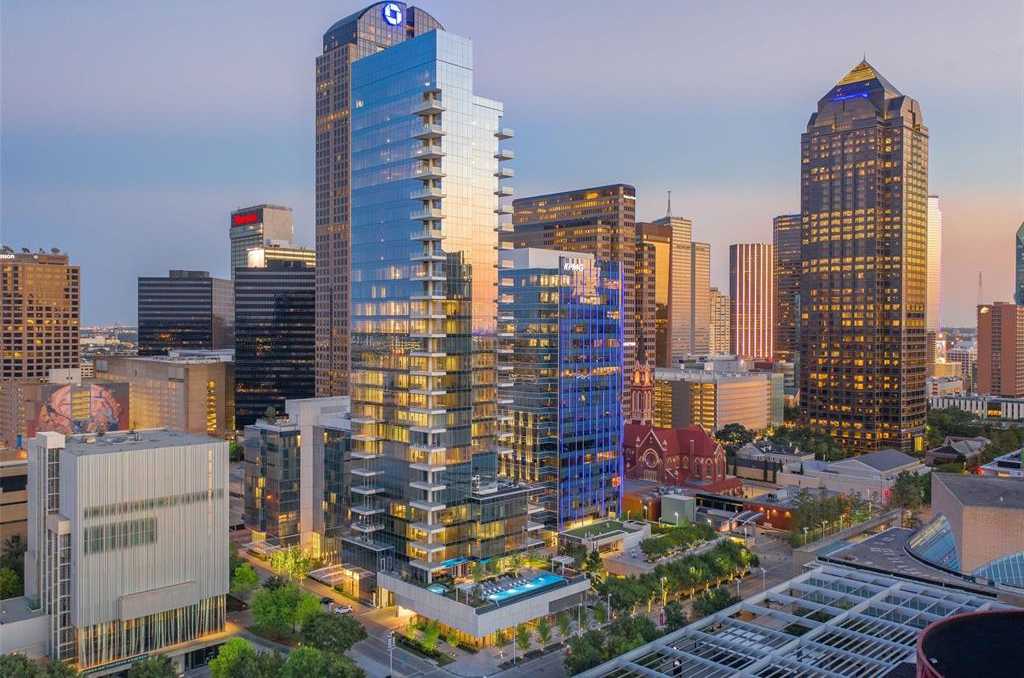 $5,000,000
9 Beds
14 Baths
11,879 SqFt
Status Active
MLS # 14088078
Property Type Single Family
Price Type --
Auction is live and absolute: Bidding ends Jan. 15th. Showings daily by appt. Work in modern luxury in the heart of Uptown, minutes from Downtown Dallas. Whether you are looking for convenience and style for a start-up,space for artists to create and exhibit their work,an incredible investment opportunity for owning luxury for-lease condos or a unique office with open retail space,this six-story property offers a desirable blend of commercial and residential possibilities.Above,the four-story penthouse has the feel of a stand-alone home,with a luxurious master sanctuary and spa bath,walls of glass, and a wraparound terrace for entertaining or enjoying some quiet time away from work.
View Property 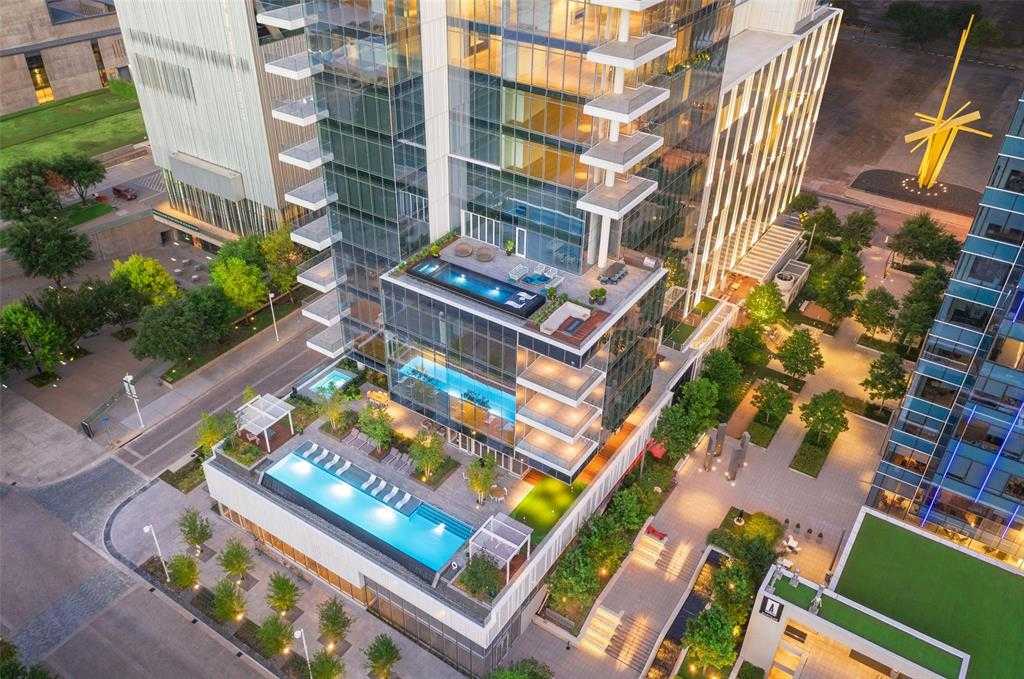 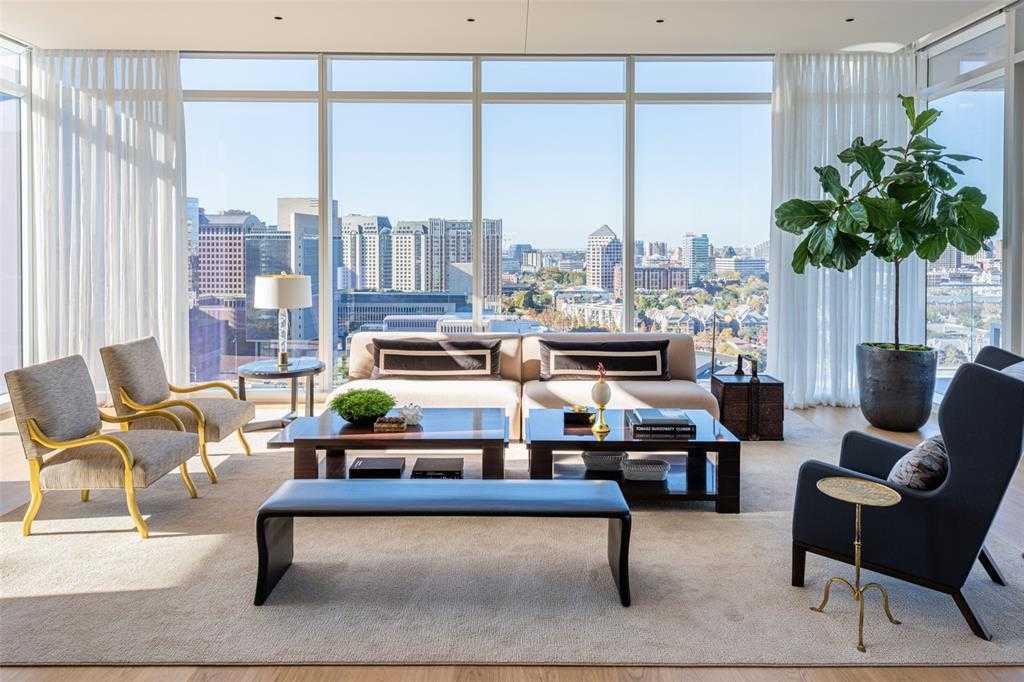 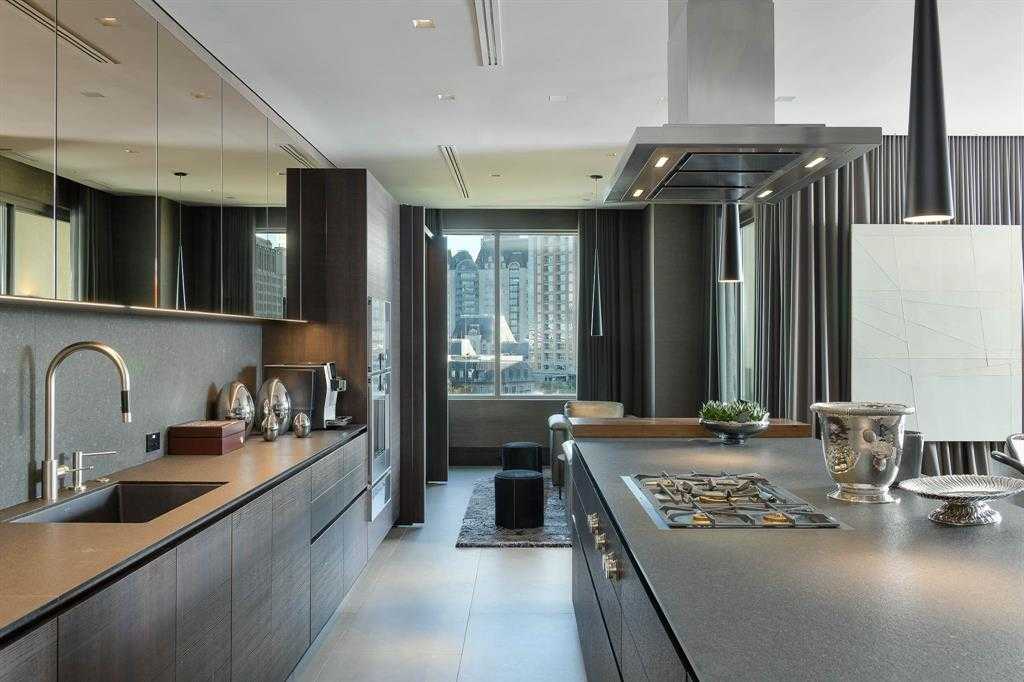